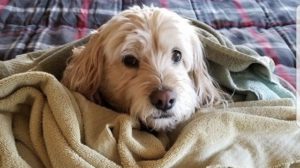 The Society for the Prevention of Cruelty to Animals (SPCA) Tshwane would like to give some pet safety tips for the cold winter.

“You are probably aware of the risks posed by warm weather and leaving pets in hot cars, but did you know that cold weather also poses serious threats to your pet’s health?” says Elsa Daniels, spokesperson for SPCA Tshwane.

Companion animals aren’t the only animals in need of protection during the winter months.  Livestock, including horses and donkeys, have their own unique considerations and needs when the weather gets cold.

SPCA Tshwane Veterinarian, Dr Floris Kruger, would like to give the following tips to pet owners:

Mrs Karen Gelderblom, Kennel Manager at the Waltloo Branch, added that wooden dog kennels can be insulated by nailing carpet pieces to the floor and insides of the kennel. Kennels placed on a patio or veranda are naturally more protected from wind than a kennel placed in the garden.  The floor of the kennel should be off the ground, and the bedding should be thick, dry and changed regularly to provide a warm, dry environment. The door to the kennel should be positioned away from prevailing winds.

If your dog has a short coat, or seems bothered by the cold weather, consider a sweater or dog coat.

Chances are good that your pets will be spending more time inside during the winter, therefore make sure that your house is properly pet-proofed. Use heaters with caution around pets, because they can burn or they can be knocked over.

Owing to a large number of animals, and specifically stray and surrendered dogs that were taken in over the last few months, we have been battling a serious Canine Distemper outbreak at our Waltloo branch.

Distemper is a serious airborne virus that spreads rapidly among dogs. The disease also has an incubation period and symptoms often take time to manifest. Dogs may initially appear healthy, only to become sick later. Vaccination is the only way to prevent this disease however the Society takes in all animals with no guarantee that these animals were vaccinated prior to surrender.

As a result of the outbreak safety measures had to be put in place. One of these included the suspension of our Adoption service in order to quarantine the premises and prevent the decease to spread.

The situation was closely monitored by our kennel and veterinary personnel; healthy animals were vaccinated before they were moved to our Adoption kennels. Here they underwent further monitoring for an extended period to ensure they remain decease-free and we are thrilled to announce that the suspension of our Adoption services has now been lifted.

We urge the public to contact their nearest SPCA Tshwane branch and give one of these adoption dogs a chance at a forever home. As a general precaution, we also urge the public to ensure their pets’ vaccinations remain up to date. 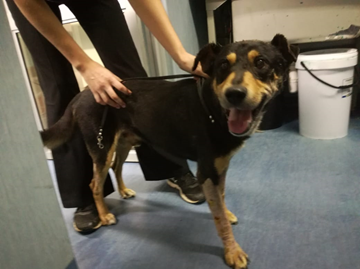 Bolt was viciously attacked by other dogs just after Christmas 2018.

When he was admitted to Waltloo clinic, he was unable to stand, collapsed and in shock. His owner was distraught. Both his front legs as well as his head and neck were severely macerated, and his wounds were deep and septic. He was vomiting blood. He did not show any response to the first three days of intensive treatment in the hospital.  – he just remained collapsed and inappetant.

We thought that Bolt was not going to make it but he pulled through! After many bandage changes and intensive medical treatment, Bolt is finally his old self again. He is eating well and wagging his tail. We are so very happy to see his wonderful personality shine through. What a fighter! 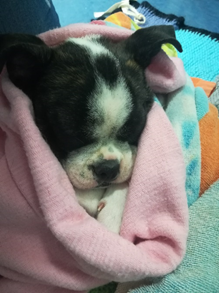 This sweet little Boston Terrier cross was surrendered to the SPCA in late 2018. Unfortunately, he suffered from the disease called Parvovirus also known as “Katgriep”. The disease carries a very poor prognosis, and many unvaccinated puppies die from it.

Our Veterinary staff comes across several cases on a regular basis, particularly during summer months.

Because of his adorable nature we just had to try to pull him through. He was isolated from all the other dogs, and we started the supportive treatment straight away. Through the hard work, and lots of TLC of everyone involved, and not to mention his fighter spirit, he made it.

He has since been adopted by a loving family, and the adorable guy was lucky enough to get his “furrytail” happy ending.

Owing to number of animals, and specifically stray and surrendered dogs, we have taken in over the last few weeks we have been battling a potential full-on Canine Distemper outbreak at our Waltloo branch.

Distemper is a serious airborne virus that spreads rapidly, and there is no cure. Symptoms often time to manifest and dogs may initially appear healthy, only to become sick later.

The health and well-being of all animals in our care must take priority at all times, and we are doing everything we can to contain the threat of a full-on outbreak in our dog kennels. Our Veterinarians and kennel personnel have been working together to ensure that strict hygiene and isolation protocols are continuously followed to prevent further spread of this virus – however, the situation has become more serious in recent days.

As such, the Management Committee in consultation with our Veterinarians and kennel personnel, have taken a decision quarantine the branch’s kennels for at least four weeks to stop a full-on outbreak.

Through a rigorous cycle of continuous monitoring, testing and vaccination coupled with deep cleaning kennel blocks and common areas as well as isolation procedures, we are optimistic that a full-on outbreak can be stopped.

Sadly, given the seriousness of the virus, the potential for suffering and the high infection possibility, the humane euthanasia of certain dogs cannot be ruled out.

Quarantine procedures mean that our normal services will be limited, and in some instances suspended. During the quarantine period, no dog adoptions will be processed as we cannot, in good conscience, adopt out potentially sick dogs. This will result in suffering and heartbreak, and the potential spread of the virus outside of the branch. Access to the branch’s facilities will be restricted and boarding services will be suspended. Our animal hospital’s public services will be limited to give the Veterinarians extra capacity to direct their time and effort to the animals in our care.

Notwithstanding the quarantine, we will ensure that there will be someone available at all times to accept stray and unwanted animals (under strict isolation protocol) at the branch and our Inspectorate will operate as normal. Cat and other animal adoptions will be managed by appointment.

Our Centurion branch is not affected in the same way at the moment, but we continue to monitor the situation there and will implement similar measures if necessary.

The quarantine at the Waltloo branch is effective immediately.

We urge all dog owners to vaccinate their dogs against Distemper. The first signs of Distemper include sneezing, coughing and thick mucus coming from the eyes and nose. Fever, lethargy, sudden vomiting, diarrhea and loss of appetite are also common symptoms of the virus.

Please be assured of our best efforts at all times ensuring the health and well-being of all the animals in our care. 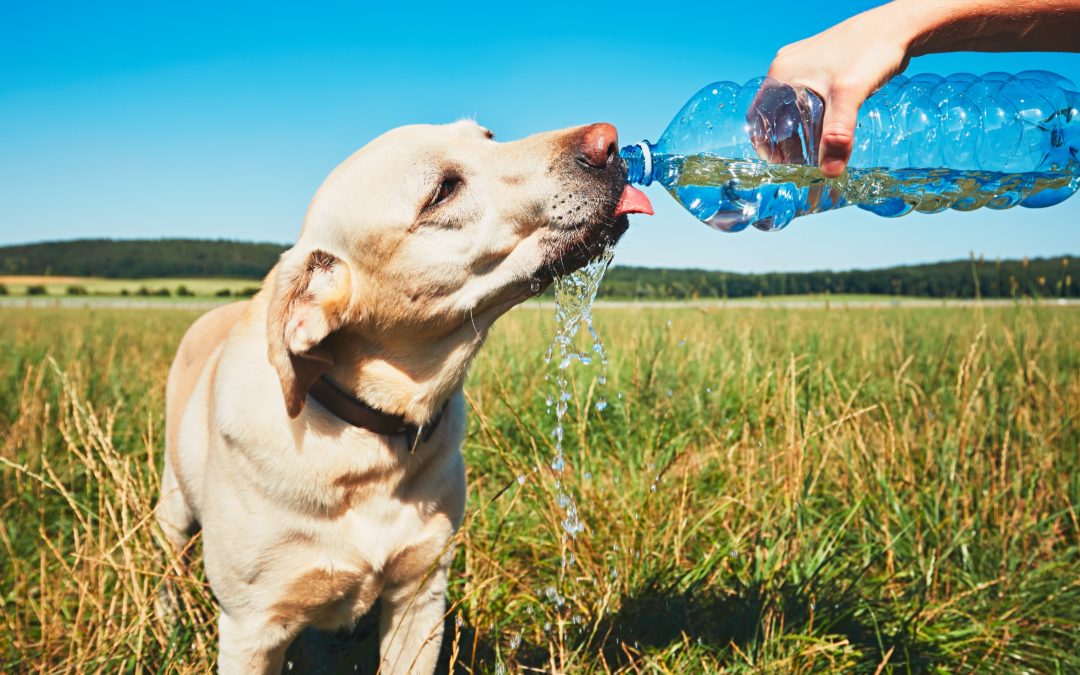 HEATWAVE TIPS: Attending to your pets during the heatwave

When animals are exposed to high temperatures, they are vulnerable to dehydrating or suffering from severe stress.

In order to prevent this pet owners should start preparing to protect their pets from the heat in advance.

The most effective way to help animals in hot weather is to ensure that there is plenty of shade, clean and cool water, and allowing them to rest.

Ample water that is both clean and cool should be easily accessible for animals. If there are a large amount of animals, there should be a large amount of water sources that is spread out so as to prevent overcrowding at one source. The water containers should be fixed in such a manner that it will not get tipped over by animals. Water should be fixated to pipes that can either automatically refill as water levels decrease or owners should check every so often that the water containers are always full. Owners should familiarize their pets with the different water sources days in advance from the heatwave. This is to ensure that the animals do not have to search for their water in the heat. Water sources should also be placed nearby shady areas so that the animal doesn’t have to travel far in the heat in order to get water.

Pet owners should ensure that there is plenty of suitable shelter for all their pets. If there is a large number of animals, the owner might have to consider separating the animals into groups and providing individual shelter for each group to prevent overcrowding which will increase the risk of the animals becoming stressed.

Suitable shelter is shelter that simultaneously shelters the animal from the harsh sun as well as allows cool wind to pass through.

Shelter that is made out of materials such as aluminium or galvanised steel for the roof because they reflect the radiative rays of the sun, shelter made from cloth/timber/corrugated iron.

The inside of your home is also suitable due to there being shade, ensure windows are left open to allow the cool wind to pass through.

Large trees that can provide great amounts of shade. We advise that owners do not only rely on the shelter of trees.

Kennels must be moved under the shade.

TRANSPORTING ANIMALS IN THE HEAT

We do not recommend that owners travel with their pets during the heat wave unless it is a matter of urgency.

In the event of an animal needing to be transported during the heat wave we advise that the animal be transported in the early hours of the morning or in the later hours of the day toward the evening when temperatures are at their lowest. Owners should stop ever so often when traveling long distances and should provide the animals with cool water. Under no circumstance should an animal be left alone in the vehicle in the sun, even if the windows are open.

Pets should not be forced to exercise/work in the heat. If you would like to exercise with your pet it should be during the early hours of the morning or the evening when temperatures are low.

Animals that have dark skin/fur

Animals that are sick/injured

Animals that are still young

Animals that have no access to water, shelter and food.

Animals that are restrained (chained/ tied up)

Signs of heat stress include:

Excessive amounts of saliva in the mouth

IMMEDIATELY remove the animal from direct heat/sunlight. Pick the animal up and place it somewhere shady and where there is cool wind blowing. Offer the animal small amounts of cool, clean water. Wet the animal’s feet and legs. Spray the animal with cool water. Smaller pets can even be placed inside buckets of water for a short period under the supervision of the owner. If the animal is not cooling down, it should be taken to the vet immediately.